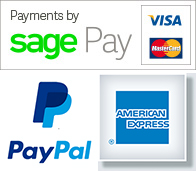 A gift for a couple on their golden 30th wedding anniversary.  Beautiful satin ribbons are tied to close the boxes.